An Easy Guide to Recycling Numbers on Plastic Products

Ever wondered what the symbols on plastic products mean?

Fischer Plastics manufacturers with an array of different plastics, subsequently we have different recycling numbers on the bottom of each item manufactured. Decoding these numbers can be confusing and overwhelming for consumers. Hence the following is an accessible guide to plastic and recycling numbers: 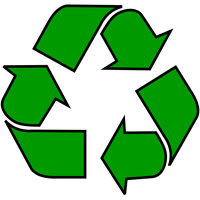 Usually accompanied by the letters “PETE” or “PET,” this resin is used for soda bottles and other containers for edible and non-edible goods. When it is not being used to manufacture  a plastic container, you might recognise it by another name: polyester. It is also one of the most widely accepted forms of plastic in curbside recycling programs, though the amount of useable material available for new products after breaking down this plastic is relatively small.

The second most widely used resin for plastic bottles, HDPE is a stiff, durable material with a high resistance to chemicals, which has made it the go-to plastic for food items like milk and juice, as well as household cleaners and trash bags. It is also easy to break down in the recycling process and easy to reform, making it one of the most efficient consumer plastics. Most curbside recycling programs have no problem with accepting products made from this plastic.

First discovered in the 19th century, PVC is commonly used in building materials today—especially pipes and plumbing material—due to its strength and chemical resistance (although occasionally it is used for some household products). It has a nasty habit of releasing highly carcinogenic toxins into the atmosphere when it's burned, so recycling is a significantly less appealing option for PVC disposal, and it's usually not accepted by curbside recycling programs.

This plastic is becoming more common today, especially for manufacturing squeeze bottles and grocery bags. Plastics made from LDPE are usually solid, and they are regularly used as sealants because of this quality. While they were not included in curbside recycling programs at first, plastics made from LDPE are now becoming more commonly accepted.

Regarded as one of the “safest” plastics produced today, PP is the primary material for squeezable bottles, bottle caps, and straws. Along with LDPE, it's also used for Tupperware and other food-storage containers that can most definitely be reused over time. It has an extremely high melting point, so it's one of the best consumer plastics for items that will be exposed to heat. Like LDPE, it's becoming more common for curbside recycling programs to accept things made from this plastic.

What are Fischer Products are made of this plastic?

More commonly known as styrofoam, this type of plastic is not only notoriously difficult to recycle, but it's also been shown to leach dangerous toxins over time into anything packaged in it—and even more significant amounts of toxins when it's burned. This is the resin usually found in disposable serving trays, egg cartons, and cups, and it's rarely accepted by curbside recycling programs due to the danger it poses and the difficulty of recycling it.

There are countless other plastics, but very few of them are easily recycled in curbside programs, making this category the catch-all for everything that could conceivably be broken down and reformed, but might be better off reused or reformed in some way that doesn't require a chemical process. This category encompasses everything from bulletproof material to those large water jugs on office coolers, and is rarely included in curbside recycling programs.

What Fischer Products are made of this plastic?
High Impact Styrene

(Includes HDPE No. 2 and LDPE No.4)  Random Co-Polymer

To further our efforts in being a sustainable company and to ensure we are offering our customers the best options possible, we also have an environemntaly friendly range of storage.

By recycling storage bins  we have created the the Viro-Pak is made of 100% recycled tough and durable Polypropylene.

To view the mentioned Fischer Product range of plastic storage solutions, download the below catalogue. 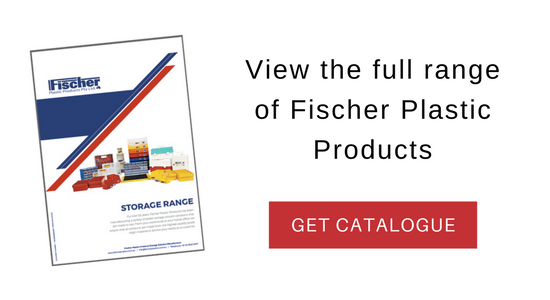